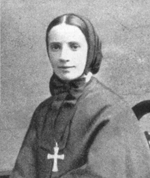 Mother Frances Xavier Cabrini, a co-patron saint of the Italian Catholic Federation, was born in Sant’Angelo Lodigiano in the province of Lombardy, northern Italy, on July 15, 1850. She was a major benefactor for Italian immigrants in the U.S.

By the time of her death in 1917, Mother Cabrini had established 67 schools, hospitals and orphanages throughout the U.S., South America and Europe, and her order numbered in the thousands.

She is the first naturalized US citizen to be declared a saint (July 7, 1946).

HISTORY OF THE MOTHER CABRINI SHRINE IN BURBANK

Mother Frances Xavier Cabrini came to San Fernando Valley, California in the late 1800s. In 1880, she founded the Missionary Sisters of the Sacred Heart which then built the Villa Cabrini Academy.

In 1916 Mother Cabrini built a small chapel in honor of the Blessed Mother above Villa Cabrini Academy, atop Mount Raphael, for the residents of the San Fernando Valley. The chapel was said to protect their crops and shelter the residents from the ravages of fire. During the war, it also served as a beacon to pilots. Mother Cabrini made daily mediation visits to the chapel while overseeing a new academy for girls. 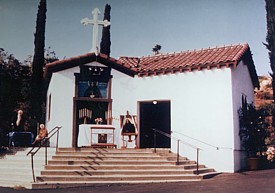 For decades, the chapel attracted thousands of pilgrims who made the steep climb every December to honor St. Cabrini and prayed to the woman who was consumed with the love of God and worked tirelessly “for the greater glory of the Most Sacred Heart of Jesus,” the motto she chose for the Missionary Sisters.

In 1970, the land on which the chapel was built was sold to a developer. However, members of the Italian Catholic Federation in the Archdiocese of Los Angeles raised money to rescue the chapel and moved it down the mountain in 1973 to St. Francis Xavier Church in Burbank where they later restored it with stained glass windows, a mosaic of St. Cabrini, new tile, and more. Fr. William C. O’Connor, St. Francis Xavier Church pastor and San Fernando Valley District ICF Chaplain at the time, headed the renovation committee. Many hours of planning went into the project and many donations were made in the form of construction-related labor and historical artifacts for the collection. A formal dedication ceremony of the restored chapel was held on the grounds of St. Francis Xavier Church on Sunday, September 14, 1975.

A library sponsored by the ICF was built under the direction of ICF Branch 102 member Orlando T. Granata in 1993. Mr. Granata also supervised the moving of the chapel to its new location on the St. Francis Xavier Cabrini Church property. The library contains historical and contemporary works about the immigrant saint, and adjoins the chapel.

In keeping with tradition, a special Mass honoring Mother Cabrini along with a Pilgrimage to the Mother Cabrini Shrine are held on the first Sunday in December of each year, featuring a procession to the Shrine which begins at St. Francis Xavier Church. All ICF branches, parishioners and affiliated Saint Francis Mother Cabrini Groups in the Southern California area are encouraged to join the Mass, Pilgrimage and Luncheon. Those who have difficulty walking are welcome to join in the procession by using automobiles to drive across the church grounds to the location of the Shrine.

In addition to the annual December Pilgrimage, the Mother Cabrini Shrine is open between 9:00am – 1:00pm every 2nd Sunday of February, April, June, September, and November, or by special appointment.